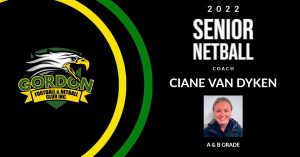 The Gordon Football & Netball Club is excited to have Ciane Van Dyken return to the helm of our senior netball sides in 2022.

Ciane lead our A and B grade sides to the CHNL finals series in 2021 and is looking forward to guiding and playing alongside our 2022 representatives.
As a playing coach, she brings a great deal of netball knowledge and experience to the club.

She played junior and senior netball in Ballarat, before making the shift to play senior netball in the Central Highlands League in 2019.
She is a familiar face in the netball umpiring scene, regularly officiating matches for multiple leagues and associations.

Welcome back, Ciane! We look forward to another exciting season of senior netball at Gordon!