Saturday saw another Eagle play his 200th game as the reserves continued their impressive form to remain in the top eight. Michael Anderson was named amongst the best players in his milestone game and is an inspiration for all within the club. Michael also coaches the under 18 football team, which will also play finals, and along with his entire family is involved both on and off the field and courts at the Nest. Congratulations Michael! 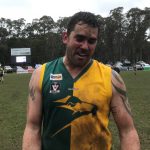 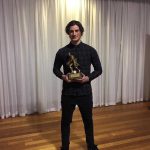 Darcy Frantz – Runner up CHFL under 15 Best and fairest.News, Uncategorised