0
Dunnstown V Gordon
125 year Anniversary Match.
The return of Co-captain Adam Toohey and on-baller Ethan Crackel comfortably covered the loses of power forward Brendan Sutcliffe (back problem) and key defender Bradley Hallam (unavailable) in the match between Gordon and Dunnstown last Saturday. Toohey’s five goal haul along with Crackle’s two majors helped the Eagles to an impressive sixty four point victory against a young but enthusiastic home side.
The ‘Towners’ bounded out of the blocks with a determined mindset that caught the Eagles by surprise.  Their disciplined aggression both at the contest and opponents restricted the Eagles’ efficiency and confidence swelled within the younger hosts. This approach along with an obvious wind advantage gave them a lead of thirteen points at the first break. Just before the siren Eagle ruckman Zac May left the field with what appeared to be a serious arm injury.  Scores: Gordon 1.3 – 9 Dunnstown 3.4 – 22.
Luke Gunnell grabbed the opportunity to return to ruck duties and immediately impacted the stoppages. He, along with fellow on-ballers Jordan Clampit, Horsham, Hoy, McCabe and Ryan completely controlled the first ten minutes. Any time Dunnstown ventured forward the Eagle defenders stole the football by winning front position and aggressively rebounding with speed and precise foot skills. Toohey kicked three goals in a masterful display. Crackel kicked his second goal and his forward pressure seemed to inspire his team mates as the Towners struggled to find their earlier form. Highlights were aplenty and the ‘goal of the day’ was already a raffle between Toohey’s second major under extreme pressure, Clampit’s running boundary line six pointer, or the long bombs from Luke Gunnell, Isaac McCabe or Ben Frazer. The entire Eagle group ran riot in an imposing display. Scores at the long break: Gordon 9.10 – 64 Dunnstown 3.4 – 22.
Dunnstown with the wind at their backs mustered everything they had and regained some respect during a torrid third quarter. However the Eagles trumped any progress the Towners made. Toohey kicked another two majors and singles to Matthew Hoy and another to Jordan Clampit stretched the lead out to 54 points at three quarter time.
Scores: Gordon 13.12 – 90 Dunnstown 5.6 – 36.
Knowing the result was beyond doubt the home side decided to restrict the scoring damage by practising their defensive skills during the final term. Defend they certainly did as every Dunnstown player was seen in their defensive area on many occasions. As the day turned a gloomy grey the congested stoppages slowly brought the dreary term to a plodding halt. The highlight of this colourless quarter being another entry into the ‘goal of the day’ contention as defender Gerard Clifford calmly goaled from a set shot. Dunnstown failed to add to their three quarter time total and the Eagles ran out 64 point winners.
Final scores: Gordon 14.16 – 100 Dunnstown 5.6 -36.
Next week the Eagles play last season premiers Beaufort at the Nest. Both sides have players sidelined with injuries but there is enough talent to guarantee a mighty match.
Hope to see you there.
Go Eagles!
Rob.
Dunnstown:
Goal Kickers: T. Collins 2, H. McKimmie 2, J. Leonard
Best Players: R. Adams, J. Sutherland, J. Brown, H. McKimmie, B. Leonard, J. Williams
Gordon:
Goal Kickers: A. Toohey 5, E. Crackel 2, J. Clampit 2, M. Hoy, G. Clifford, I. McCabe, B. Frazer, L. Gunnell
Best Players: L. Gunnell, J. Clampit, Z. Ryan, I. McCabe, S. Nippress, A. Toohey 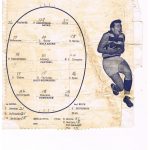 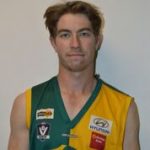