The Eagles challenged Newlyn at Newlyn for three quarters before the home side kicked six goals in the last quarter to run out comfortable 36 point winners. It was the second loss in a row for the Eagles who made five changes from their previous games narrow defeat to Springbank.

In an even first quarter the Eagles led by one goal, but wayward kicking prevented them from gaining any scoreboard pressure against a determined Newlyn outfit. Brendan Sutcliffe’s long range goal midway through the quarter was the only major scored for the term.

The six point quarter time advantage was quickly overhauled by the disciplined Cats with their playing coach Dan Wehrung ‘one out’ in their attacking 50 kicking three quick goals. The Eagles’ ball use was always under pressure and entries into its forward zone made it near impossible to take an uncontested mark. Jordan Clampit kicked truly, for the Eagles only goal during the second quarter, whilst the home side added five majors in a polished display.

Though Gordon raised its intensity during the third quarter the second half belonged to Newlyn. The Eagles’ indecision and poor foot skills along with Newlyn’s dominant midfield insured the home side maintained their lead into the last break.  Each side registered two goals with the scoreboard showing a twelve point advantage to the Cats.

With the breeze at their backs the home side controlled the final term. The Gordon defence worked overtime to halt the opposition’s confident dominance without little effect. Steve Nicholson and Brad Horsham each registered late goals for Gordon but as the final siren sounded Newlyn had bolted to a thirty six point victory. The ever reliable Mark Gunnell and the hard working on baller Ethan Crackle, who chilled Newlyn’s star Steve Clifton after half time, were named the Eagles’ best. Young gun Ben Frazer returned from an overseas trip to continue his promising senior career.

The absence of key players cannot be the sole reason for this defeat. With one less scoring shot than Newlyn, Gordon again butchered their possessions and must work towards rectifying these costly errors.

This coming Saturday we host traditional rival Buninyong who had the bye this week. Buninyong coaches and players were seen watching our game – and probably taking notes.

Let’s hope all within the Eagle group lift for a better performance.

Hope to see you there.
Go Eagles. 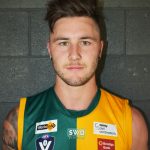