Four changes to the side that crushed Daylesford the previous week did little to stop another impressive Eagle performance at the ‘Nest’ last Saturday.

The visitors kicked the first goal of the day and for a short time looked the better of the two sides. Gordon’s Co-Captain Adam Toohey worked both ends of the ground in an attempt to shift momentum and it was he that kicked the Eagles’ first major. Jaymes Gorman goaled amongst missed opportunities before Toohey added another goal prior to the quarter time siren. Scores Gordon 3.8 -26 Carngham Linton 2.2 – 14.

The Eagles advantage extended to 40 points during the second term. The visitors had no answer for Eagles’ key forwards Toohey and Brendan Sutcliffe. Sutcliffe lead hard and fast from the goal square and was rewarded with three goals. Toohey worked further afield but still managed to kick his third major.  Perhaps the goal of the first half came off the boot of Jaymes Gorman.  Known for his speed and ‘goals on the run’, Gorman showed his class by kicking truly with a set shot from the boundary line. The lead would have been far greater had it not been for some wayward kicking for goal. Scores at half time Gordon 8.14 – 62 Carngham Linton 3.4 – 62.

As the players made their way onto the ground for the third term a heavy mist rolled through the gums and crept its way up the ground towards the scoreboard. The mist hung over the oval as if it was too tired to move any further, causing the whole affair to turn grey. The lights were switched on which illuminated the players and no player stood out more than the charging Sutcliffe. Of the nine goals kicked during the quarter, Sutcliffe kicked five, in a performance that displayed power and skill. Three of his goals were gathered and snapped after second and third efforts. On-baller Brad Horsham, from an impossible angle, drilled the football over the goal umpire’s head and Jaymes Gorman worked to the end of a chain of handballs to kick his third goal in his return match. The consistent Toohey continued to work hard and was rewarded with two more classy majors. Scores at three quarter time Gordon 17.19 – 121 Carngham Linton 4.6 – 30.

The last quarter became even greyer. Smoke from nearby wood heaters drifted and mixed with the persistent mist. The heavy ground conditions slowed play with both sides struggling to use the football with any fluency. Defender Zac Cattlin moved forward to kick his first senior goal and Toohey added another to bring his tally to six goals for the afternoon. Once again the winning margin had grown above the one hundred point mark.

Matt Raworth was named best for his four quarter effort that linked and set up many forward entries. He and his fellow on-ballers, James Maher and Matthew Hoy, covered the key losses of Tye Murphy and Ethan Crackel. Ruckmen Luke Gunnel and Zack May were also named amongst the Eagles’ best. The twin towers in the Eagles’ forward half, Toohey 6 and Sutcliffe 8 goals, again provided the team with reliable, effective targets.

This Saturday the Eagles are set for a reality check as we travel to Waubra in the last game of the home and away season. Waubra has lost its past two games but remain on top of the CHFL Ladder. If The Eagles win this much anticipated game they will most likely play Buninyong in the first round of finals. If the Eagles lose they will again face Waubra the following week.

Saturday’s reserves match saw two more milestones reached by loyal legends of the Club. Congratulations to Gary Busitill who played his 300th game and Luke Toohey who bought up his 250th game. Both are true Eagles that have served the Club magnificently. Congratulations also to Matt Conder who played his 50th game. All three helped the reserves keep their finals dream alive with another impressive win.

This Saturday’s match is sure to be an early finals hit out that is guaranteed to please. Hope to see you there. 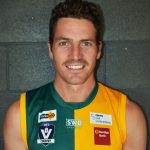 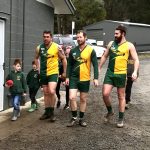